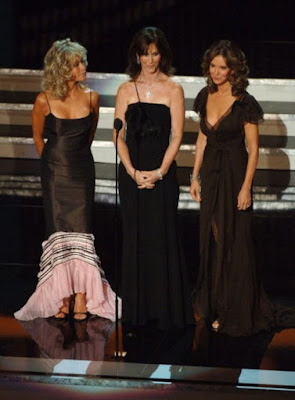 First off, today's EMMY Post is a bit last minute. I have been covering Award shows on FH the last few years with a skin salute to the nominee's. Recently, they began to get a bit repetitive, and to be honest, they have been getting a little boring to put together, the nominee's were often the same actors, year after year. (how many nude Bryan Cranston scenes can you enthusiastically cap...) I also wasn't sure readers were enjoying the award themed days.But, after getting home tonight, my need for tradition took over...

I have always loved award shows, ever since I was a little kid. I admit the bloom is a bit off the rose, but growing up in a small city, far far away from Hollywood, they were a bit of window to a world I spent a lot of time dreaming about. Every award show has a few moments that stand out. I remember Charlie's Angels reuniting at the 2006 EMMY'S and the DALLAS women given an award to Jane Fonda in the late 80's. 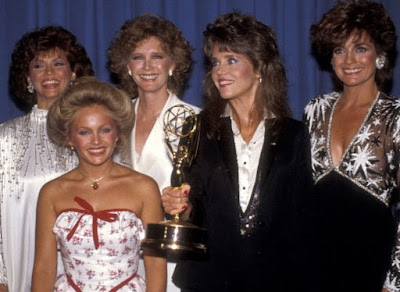 I also love the 'theme song' numbers that take me back recording TV show intros on my little 12 inch bedroom TV when I was growing up. I love television, and the EMMY'S always kick off the award season, and the fall television season. To stimulate my interest this year, I decided to take a brief look back to when I first started watching the EMMY'S. It gave me a renewed interest in posting this year. Hope you enjoy this year's edition and if not remember, the EMMY'S only come along once a year!