Cop Who “Doesn’t Talk About” Being Gay Joins “Survivor”

A 42-year-old Boston police sergeant named Bret is one of the new cast members of Survivor’s 33rd season, which premiered Wednesday.

Bret is openly (albeit selectively) gay but revealed he won’t be talking about it much on the upcoming season because it’s “such a small part of [his] life” that he rarely ever talks about it.

“Being gay isn’t something that defines me,” he said recently during a pre-season interview. “It’s a part of my life but I’m also a cop, I’m an uncle, I’m a brother, a son. I’m not ashamed of it but I don’t talk about it because it’s not a big deal.”
Bret went on to describe himself as a “big people person” who “talks a lot.” He says he’ll rely mostly on his “intuition and police experience” to win the game.

“In police culture, you’re used to people being nice to you up front and not so nice to you behind closed doors,” he said. “So I’m used to that culture.”

The current season pits Gen X people against Millennials to see which group will come out on top. 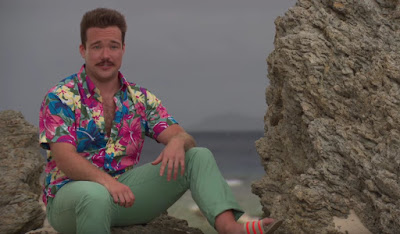 The season’s only other gay cast member is Zeke, a 28-year-old real estate asset manager from Brooklyn who once considered becoming an Episcopal priest.

Zeke doesn’t mention his sexuality at all during his pre-season interview, but alludes to it in explaining why he chose to major in Religious Studies in college.

“I wanted to know more about the bible than other people,” he said, adding that it’s nice to “have a greater understanding of the Bible and how it was written” when people try and use it to condemn his “choices.”

Check out both Bret and Zeke’s pre-season interviews below: