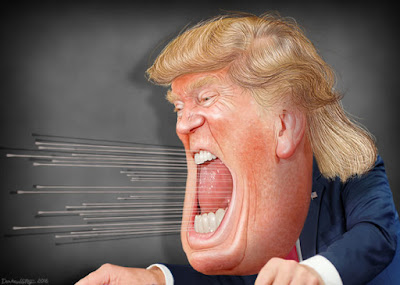 Why does Donald Trump want to be president? According to some of those close to him, it might be out of feelings of revenge against his critics. Especially the man he hopes to take over the presidency from, Barack Obama, who mercilessly and hilariously mocked him at the 2011 White House Correspondents Dinner.

Trump was at the height of his racist, conspiratorial birther fervor and Obama seemed to delight in spending a sizable portion of his speech ripping his fragile ego to shreds.

“No one is prouder to put this birth certificate matter to rest than the Donald. And that’s because he can finally get back to focusing on the issues that matter. Like did we fake the moon landing? What really happened in Roswell? And where are Biggie and Tupac?” Obama jabbed.

He said Trump showed real leadership in deciding to fire Gary Busey over Meat Loaf or Lil Jon after their team lost a cooking challenge on The Apprentice.

While most attendees at the White House Correspondence Dinner are smart enough to at least appear as if they are in on the joke, Trump sat with a frozen, grimace-smile plastered to his face that gave the impression that Obama was effectively getting under his skin.

In a preview video for Frontline‘s upcoming election special, “The Choice 2016,” Omarosa and conservative political consultant and lobbyist Roger Stone suggest that Trump did in fact take it highly personally and that it likely played a big role in his deciding to run for president. In fact, to hear them tell it, it was the night that finally prompted him to run.

“Oh, Barack Obama is starting something that I don’t know if he’ll be able to finish,” Omarosa remembers thinking at the time.

Stone believes that it motivated him to run out of revenge, to “show them all.”

“Every critic, every detractor, will have to bow down to President Trump,” Omarosa added. “It’s everyone who’s ever doubted Donald, who ever disagreed, who ever challenged him. It is the ultimate revenge to become the most powerful man in the universe.”

Watch the video below.