"There is no way I will survive Mike Pence doing Carpool Karaoke."
From: NewNowNext

Our favorite difficult person Billy Eichner stopped by The Late Show to chat with host Stephen Colbert about something different for him: politics.

Usually Eichner sticks to insulting celebrities and confused civilians on the street, but after the Republican National Convention the out comedian couldn’t stay silent any longer. 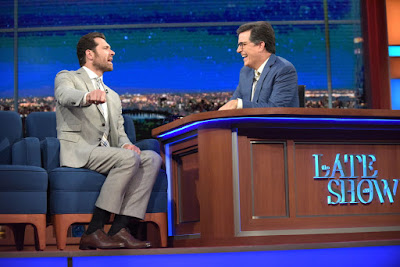 On the talk show he went after Donald Trump and his running mate Mike Pence who has an anti-LGBT past-including believing in conversion therapy for gay people.

“It’s not only just the policies — it’s also the other things they have to do now,” Eichner complained to Colbert the night of Trump’s RNC speech. “There is no way I will survive Mike Pence doing Carpool Karaoke. What song’s he gonna sing? ‘I Deported Your Grandmother’?”

But Eichner has his own form of conversion therapy he wants to pitch to Pence-and it involves Pence’s wife.

“So here’s my idea,” said Eichner. “I have asked on my show, ’who’s hotter: Barack Obama or Abraham Lincoln?’ I usually say Barack Obama, but I now actually want a three-way with Mike and Karen Pence. Because if you think you can convert me, I want to see you try. Bring it on, Karen Pence!”