The Massacre No One Reported: Up To 15 Dead In Mass Shooting In Mexican Gay Bar In May


"No Eiffel Towers are being lit up for our Mexican LGBTI brothers and sisters shot to death in a mass shooting, no flowers are being laid outside Mexican embassies, no candlelight vigils anywhere.”

There has been wall-to-wall coverage of the massacre in Orlando since Sunday Monring, but an attack on a gay club in Mexico just a few weeks before has gotten little coverage.

On May 22, three gunmen walked in La Madame, a gay bar in Xalapa, and opened fire. At least five people were killed, though some reports put the death toll closer to 15. “They opened the doors violently and drew their guns. There were shouts,” Luis Manuel Rivera Aguilar, who was at the bar with his nephew, told local media. “They had no mercy. Bullets ricocheted everywhere. The white tiles were stained red. Those who wanted to escape slipped in puddles of blood. It was a slaughterhouse.”

Aguilar’s nephew, Luis Donaldo Rivera Calderon, was among those killed. 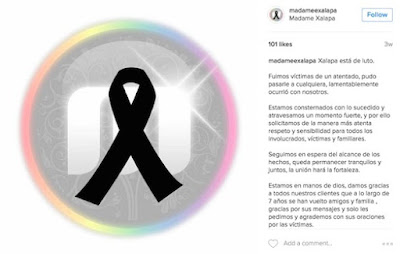 But despite the savagery of the attack and the loss of life, even LGBT media was mostly silent about it. Part of it is the language barrier, but reports are the Mexican government and mainstream media downplayed the Xalapa shooting as a gang-related incident.

One of the first English-language outlets to report on the massacre was GayNZ.com, an LGBT blog out of New Zealand.

“It disturbs me greatly that this story is not being picked up by the English-language media around the world, and the gay media especially,” says GayNZ co-publisher Jay Bennie. “Gay lives matter, regardless of where they are and however powerful the country or well-known the city in which they are gunned down or otherwise killed is.”

“No Eiffel Towers are being lit up for our Mexican LGBTI brothers and sisters shot to death in a mass shooting, no flowers are being laid outside Mexican embassies, no candlelight vigils anywhere,” he added. “The Western media and gay communities’ silence is disgraceful.”
Posted by Daniel at 6/19/2016 06:11:00 PM