Rainbow Flag At DC Bar Set On Fire, Vandals Spray-Paint “Down With The Gay Agenda”

“Our community cannot keep getting kicked, especially when we’re down."

Stories of attacks on gay and gay-friendly establishments are piling up at a disturbing rate: In the early morning hours of June 12—the same time a gunman was attacking club goers in Orlando—someone set fire to a rainbow flag outside Bourbon, a bar-restaurant in Washington DC’s Adams Morgan neighborhood.

The owners had hung the large flag outside the venue to celebrate DC’s Pride weekend. 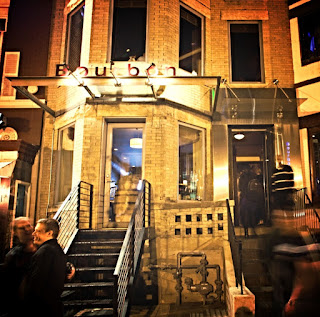 “It is appalling to us,” James Patrick Woods told the Washington Blade. “I don’t think it was targeting my restaurant. But to me it is a hate crime.”

Sadly it wasn’t the only instance of homophobic vandalism in the nation’s capital that night: Someone spray-painted the phrase “Down with the gay agenda” on the sidewalk outside Thaiphoon restaurant in Dupont Circle.

It’s not clear if the two acts were related—or if the vandal had heard about the attack in Orlando. Within a day, though, Dito Sevilla had changed the tag to read “Down with the gun agenda.” 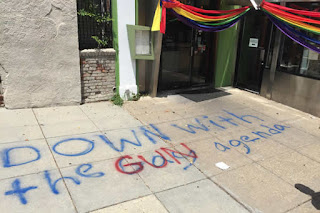 “You’re not going to come at us during Pride,” Sevilla told us this afternoon. “Our community cannot keep getting kicked, especially when we’re down.”