Pat Robertson: Christians Need To Just Let Muslims And Homosexuals Kill Each Other Off

"The left is saying, ‘Oh you’re anti-Muslim, you’re racist,’" said the televangelist. "[But] suddenly, that part of the narrative doesn’t play too well."
From: NewNowNext

Right-wing preacher Pat Robertson was about to let the deaths of 49 innocent people get in the way of his tarring LGBT people. 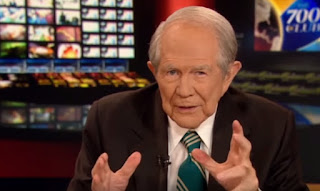 On Tuesday’s episode of The 700 Club, Robertson explained that liberals are “facing a dilemma” because the Orlando shooter declared some allegiance to radical Islam.

We’re looking at a favored group by the left, the homosexuals—that in Islam is punishable by death or imprisonment or some sanction. So what are the left going to do? How are they going to describe it? And they don’t know quite what to do now.
The fact that this Islamic gentleman opens fire in a gay nightclub and kills almost 50 homosexuals, that says something and tells the fact that Islam is against homosexuality. So the liberals are going to be scrambling to find some rationale, I think they’re going to have a hard time doing it.

Don’t worry, though—Robertson has a solution: “I think for those of us who disagree with some of their policies, the best thing to do is to sit on the sidelines and let them kill themselves.”

It’s funny how the televangelist decries Islam for being homophobic, given how much vitriol he’s spewed at the LGBT community. (And by funny we mean nauseating)

And in some truly amazing logical jujitsu, Robertson blames liberals’ support of law-abiding Muslim-Americans for the rise of Donald Trump.

“Donald Trump is riding high because he said we should screen these people and he’s absolutely right. We should screen them. So the left is saying, ‘Oh you’re anti-Muslim, you’re racist’ and all this. Suddenly, that part of the narrative doesn’t play too well and they’re stuck as to what to do. But Trump is enjoying a victory.”