After 49 innocent people lost their lives in a gay nightclub in Orlando, one Democratic Senator had enough.

Sen. Chris Murphy of Connecticut launched a filibuster Wednesday on the Senate floor, promising to stay “for as long as I can” until Congress addressed gun control.

“I live every single day with the memory of Sandy Hook,” said Murphy, who represent Newtown, where 20 children and six adults were gunned down in 2012.

Murphy is hoping to get legislation passed that will expand background checks and block people on the government’s no-fly list from purchasing guns.

By late Wednesday night, Murphy had been relieved by Sen. Tammy Baldwin and Sen. Jeff Merkley, whose cousin was murdered in a mass shooting.

Top Senate Republican John Cornyn of Texas said he is working with California Democrat Dianne Feinstein on a proposal to close the so-called “terror gap.”

“We’re working pretty feverishly,” Cornyn said. “It’s pretty clear Democrats aren’t going to let us do anything until we deal with this issue.”

But Sen. Chuck Schumer (D-NY) says Coryn’s compromises are “not all acceptable.”

“All kinds of hoops and ladders you have to jump through to get on the list, makes the list virtually untenable.” 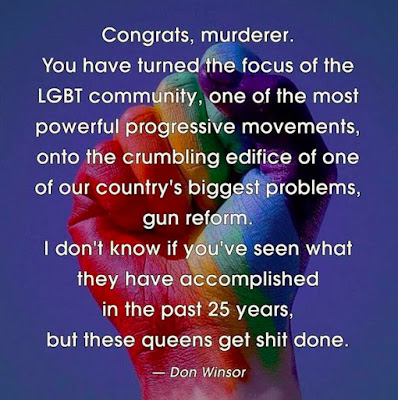 Sen. Elizabeth Warren (D-MA), one of numerous Democrats joining Murphy to maintain his filibuster, says America is “splintering” in the wake of Orlando.

Several petitions have been launched calling for bans on assault rifles like the AR-15 used in the attack on Pulse nightclub. One on WhiteHouse.gov has already received more than 170,000 signatures, ensuring it will be addressed by the Obama Administration.

And Everytown for Gun Safety, a group founded by former New York mayor Michael Bloomberg, has been active in pressuring Congress to address the issue, as well.

Whether Murphy’s efforts lead to meaningful gun-control legislation remains to be seen. But one thing has become clear in recent days: Gun violence is an LGBT issue, and the LGBT community must become active against it.

We need to bring the same passion we used to fight AIDS and to win marriage equality to ensure there is never another Orlando. Let the NRA know they’ve woken a sleeping giant.
Posted by Daniel at 6/16/2016 01:12:00 AM