Boy George Talks Whether He Slept With Prince, His Sobriety, And His New World Tour

"I heard that he loved 'Karma Chameleon,' which is so random."

George threw a taping of The Voice UK into absolute chaos last October when he was bantering with fellow judge Paloma Faith, who challenged him to a name-dropping duel by announcing she had once performed with Prince.

“Forget that, darling, I’ve slept with Prince,” George replied, though he claimed later that day in a public statement that he was merely joking about how he slept underneath posters of the music icon when he was a kid.

The story came up again during George’s appearance on the show given Prince’s untimely death last month.

“That was a joke,” George said again.

“I was doing The Voice last year and we were competing to get these kids on our team. And one of the other judges said, ‘oh, I’ve sang with Prince’ and I said ‘oh I slept with him.’ Of course that’s not true, at all. And then I changed it and said, ‘well I slept with a poster of him under me.’” 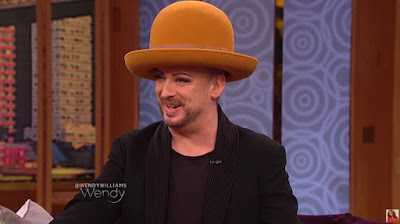 “I did meet Prince once, and I was a massive Prince fan,” said George. “I heard that he loved ’Karma Chameleon,’ which is so random.”

He continued: “I met him once in Italy and he was suitably eccentric — that’s all you can expect him to be! He was Prince!”

Wendy also chatted with The Culture Club frontman about his mother, when he knew he was gay, his band’s current world tour, and his sobriety. Check out the full interview below:
Posted by Daniel at 5/27/2016 11:01:00 PM