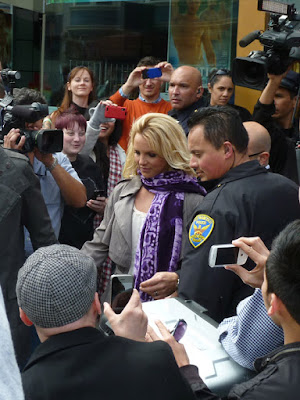 via The Bay Area Reporter:

The saga started with Mark Robertson, a producer at ABC’s Good Morning America and a longtime friend of Dufty’s. In late 2010, Dufty said, Robertson called him to propose shooting a Britney Spears promotional video in the Castro. That set off months of discussions and negotiations. From the beginning, Dufty felt strongly that the show should feature local celebrity drag queens.

“While people may jet around Brentwood trying to spot Cameron Diaz, our drag personalities are our celebrities,” Dufty said. “They raise money constantly for different charities. They add a lot to the vitality of the Castro. I was straightforward with Mark that I felt it was really important that they be onstage and be part of the program.”

Producers for GMA asked Heklina, Sister Roma, Juanita More, Pollo del Mar, and Bay Area Reporter society columnist Donna Sachet to introduce the show Sunday, March 27 at the Bill Graham Auditorium. The mini-concert featured three songs from Spears’s new album, Femme Fatale, which was released Tuesday. (The taping was moved from the Castro due to weather concerns.) With almost no direction, the five queens improvised banter that ranged from insults to couture to an endorsement of Dufty’s mayoral bid. That segment of the show wasn’t aired, but Spears did Tweet a photo of her father posing with Heklina and Pollo.

Cheerleading troupe Cheer SF also warmed up the crowd with cheers and stunts before the main act.

In addition, Dufty pushed for the inclusion of the Lavender Youth Recreation and Information Center, which supports LGBT youth, and Larkin Street Youth Services, which supports homeless and at-risk youth. Spears was unable to visit the programs, but GMA taped segments with them and recognized the organizations on air and during the Sunday performance.

After the taping, Spears made a brief visit to the Castro, where she toured the GLBT Historical Society Museum, where she met with Supervisor Scott Wiener. She also stopped by Under One Roof, and waved to fans at Q Bar, which was in the midst of throwing a Spears-themed party. She also briefly greeted Q Bar owner John Bellemore.

Those visits were at Dufty’s recommendation, he said.

“This is huge, to have her go to the historical society,” he told the B.A.R. “A lot of the programming that they do now is to reach out to schools, and just having pictures of her there next to Harvey Milk’s bullhorn, that’s big.”

Wiener said he hoped Spears’s visit to the neighborhood would bring attention to the Castro.

“I was happy to meet Britney, but I was much more happy about the fact that her visit to the Castro and the museum will bring publicity to the neighborhood,” Wiener said. “This is an amazing neighborhood with a rich and storied history. Anything that showcases our neighborhood to the country and the world is a good thing.”

In addition to raising the profile of local personalities, venues, and nonprofits, the event was a moneymaker for Under One Roof. For several days preceding the taping, the retail shop displayed a wax Britney likeness in the window – courtesy of the Wax Museum at Fisherman’s Wharf – and encouraged fans to take their picture with it in exchange for a donation.

The statue was removed just prior to her visit.

Dufty also estimated that 40 to 50 people were hired locally to work at the event.

With the excitement of the visit fading, Dufty now looks forward to the city’s next big musical guest. With no major problems and the crowds feeling generally upbeat, he considers the experience a huge success.