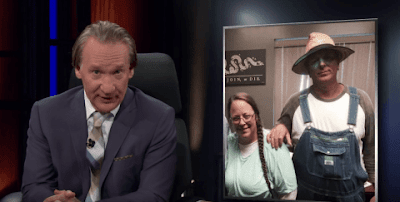 Bill Maher devoted his final New Rule on Friday’s Real Time to the GOP’s “real American” heroes, who never seem to get properly vetted before they’re thrown into the right-wing celebrity spotlight.

“Kim Davis turned out to be everything conservatives hate. She gave birth to two children out of wedlock and she’s been married four times. According to her, the answer to ‘What would Jesus do?’ is ‘Everybody'”

But the Republican mascot who takes the prize in Maher’s eyes is Josh Duggar.