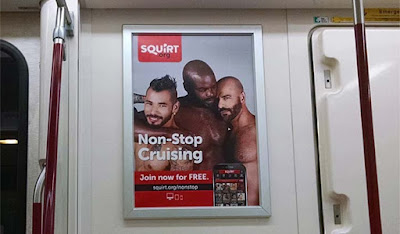 Squirt’s advertising had been running in and around Wellesley Station, in the city’s gay quarter, since 10 June and was recently introduced to subway trains.

‘The ad was taken down as it promoted sex in public places, which is against the law,’ TTC spokesperson Danny Nicholson told Metro News.

According to the TTC at least ten customers complained after the ads, showing shirtless men embracing, started to feature on subway trains. Full story here!
Posted by Daniel at 9/27/2015 08:46:00 PM