The Top 175 Essential Films of All Time for LGBT Viewers

Everyone agrees a set of movies exists that are must-sees for any LGBT viewer. We just don't agree on which ones.

Dare ask a gay man for his list, and he's likely to rattle off a few that come to mind quickly and then make amendments to it for the rest of your adult lives. Women don't start with the same list. Some movies are incredibly impactful on depictions of trans people or those living with HIV, or mark major firsts in film. Some are too campy to ignore (at least not if you want to keep up at brunch). The bottom line is there are legions of reasons why a movie could be considered "essential" to the LGBT community.

We've ventured into the tricky territory of ranking which are most essential. To accomplish this feat, everyone on staff was asked for a top 10, then we asked readers for theirs, and finally began the arguing — always politely. Television movies aren't included (sorry, The Laramie Project, An Early Frost, and Gia). Television series aren't included either (apologies to Tales of the City, AbFab, and Angels in America). The result is potentially a guide for anyone who wants to examine our roots through film.

Oh, and we reserve the right to amend it for the rest of our lives. — The Editors 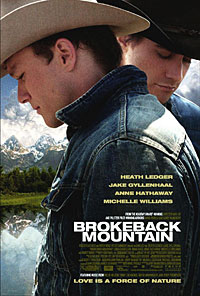 1.
Brokeback Mountain
2005
This Oscar-winning feature film is arguably one of the most beautiful and heartbreaking gay love stories ever told on the silver screen. The chemistry between the late Heath Ledger’s restrained, tortured Ennis Del Mar and Jake Gyllenhaal’s sensitive and tender Jack Twist takes viewers high into Wyoming’s Grand Teton mountains in an intimate portrait of two men brutally confined by the hypermasculine culture in which they exist. After watching the film with its emotional gut-punch of a conclusion, you’ll understand Jack’s lament and agony in telling Ennis “I can’t quit you.” The only thing that compares with the powerful performances turned in by Ledger and Gyllenhaal is director Ang Lee’s stunning visuals — which earned him an Academy Award for best director. —Sunnivie Brydum
Posted by Daniel at 6/24/2014 02:53:00 PM