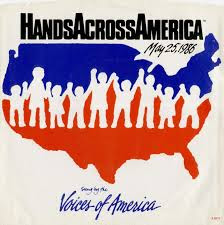 #16
“Hands Across America”
Voices Of America

It started with “Do They Know It’s Christmas,” which was a sincere effort, then Hollywood-ized with “We Are The World.” I’m talking about the mid-80’s fad of the charity awareness song. “Sun City” was a noble effort, and “Stars” was the most fun. We’re Magic In The Night!

But by the time “Hands Across America” came out in 1986, it was already over. The event was a bust (except in the biggest cities), and the song is terrible, a generic pastiche of every “United We Stand” cliche you can think of. But the 80’s stars on display in the video … priceless.
Posted by Daniel at 6/30/2014 07:42:00 PM

Email ThisBlogThis!Share to TwitterShare to FacebookShare to Pinterest
Labels: 20 Worst Songs Of The 70′s and 80′s!, charity, music, pop, song