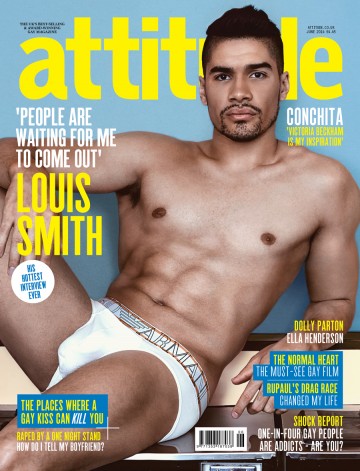 Louis Smith, the handsome British gymnast who would “go gay” for Will Smith, is going gay for Attitude magazine’s June issue. The hunky 25-year-old Olympic medalist stripped down to his briefs for the cover and in an exclusive interview inside, talks being single (he’s “looking for a long-term girlfriend”), LGBT athletes, and what he thinks of 99 percent of his gay fans.
The last time we saw Smith he was in much less clothing, posing in a thong for a risqué flex fest on Instagram. The square-cut trunks he’s sporting here are honestly quite tame for him. 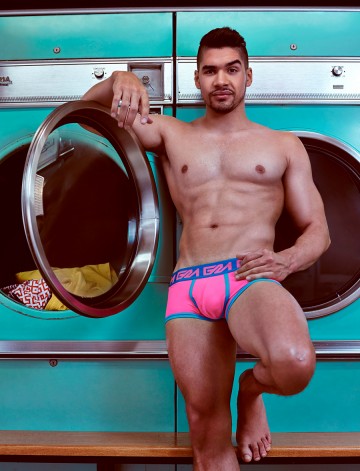 On giving advice to closeted sportsmen:

I think what Tom Daley did was very brave, but he definitely made the right choice because when you’re in the public eye someone says something and it gets twisted and before you know it there’s a news article out there before you’ve even had a chance to say anything.

Whereas what he did, he was able to put the first statement out on his own and tell people how it is; I remember Tom saying that even after he told his best friend he felt so much better, like he had so much weight lifted off him. Imagine that as an athlete, imagine having to think about that every day in training, every time you compete. It’s a worry you don’t need.

On getting attention from gay fans:

You know what, 99 percent of the time they’re fine. But now and again you do get the odd tweet — whether it’s from a girl or a gay person – that does kind of cross the line! [laughs] But you have to have a laugh and have a giggle. I mean I like a dirty joke as much as the next person so I do laugh about it.

On competing in the selfie Olympics:

Well you know, I’ve taken the odd selfie and I like to provide entertainment to the people that follow me! I don’t want to be some boring guy that takes pictures of food the whole time. I mean I’m only 25, I want to keep a bit of sex appeal!


There were some pictures snapped of me last summer that weren’t that appealing so I just want to share my training and my hard work. I like to keep people up to date with what’s going on! I was shooting my 2015 calendar the next day, and my agent said to me “Louis, go and get a spray tan, you’ll get a nice little glow for the shoot.” I was like, “I’m mixed race! I’ve already got a bit of a tan you know!” So I got a spray tan and instantly I was seeing lines in places they’d never been before, so I decided to do a video in my little paper thong!
It felt like I had nothing on to be honest. With my ADHD I tend not to think really, I just kind of go along with shit and then it was up there!

Below, the infamous ‘flexing in a thong’ video, and Louis Smith’s amazing nipples.