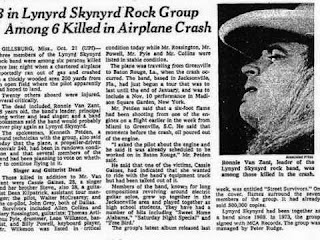 Lynyrd Skynyrd's plane crash: a Convair CV-300 (a converted CV-240) chartered by the rock band Lynyrd Skynyrd from L&J Company of Addison, Texas, ran out of fuel and crashed in Gillsburg, Mississippi, near the end of its flight from Greenville, South Carolina, to Baton Rouge, Louisiana.
Lead singer Ronnie Van Zant, guitarist/vocalist Steve Gaines, backing vocalist Cassie Gaines (Steve's older sister), assistant road manager Dean Kilpatrick, pilot Walter McCreary and co-pilot William Gray were all killed as a result of the crash. Twenty others survived.
Posted by Daniel at 10/19/2013 10:04:00 AM

Email ThisBlogThis!Share to TwitterShare to FacebookShare to Pinterest
Labels: musician, Today in History