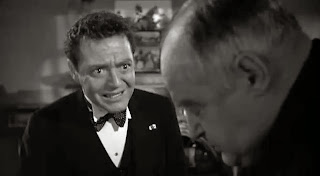 Joel Cairo
Peter Lorre
The Maltese Falcon
Sam Spade (Humphrey Bogart) came up against some mystery and some sistery in this noir classic — Peter Lorre‘s mincing treasure hunter Joel Cairo, to be precise. While the character was straightened up quite a bit for the screen, this hissing queen is still undeniably meant to be a queer counterpart for the macho hero, whose disgust at Cairo’s obvious sexuality is quite apparent and quite intense. Much has been noted about the fact that Spade slaps Cairo instead of punching him, which codes the character as feminine, gay, and weak.