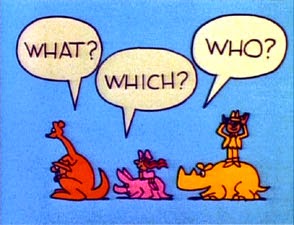 Now Rufus has a sister named Rafaella Gabriela Sarsaparilla.
If she found a kangaroo I'd say to you,
"SHE found a kangaroo that followed HER home
and now IT is HERS," but I can't say that...
'Cause SHE found an aardvark
That fell in love with HER and THEY're so happy.

And my name's Albert Andreas Armadillo
(No relation to the Sasparillas).
Because of pronouns I can say,
"I wish SHE would find a rhinoceros for ME
And WE'd be happy."

You see, a pronoun was made to take the place of a noun,
'Cause saying all those nouns over and over
Can really wear you down!

You see, a pronoun was made to take the place of a noun,
'Cause saying all those nouns over and over
Can really wear you down.

Sometimes when we take them all on the bus,
People really raise a fuss!
They start shouting out loud pronouns at us, like
"WHO brought that rhinoceros on this bus?" and
"WHAT made that horrible noise?" and
"WHICH one of them's getting off first?"
WHO, WHAT, and WHICH are special pronouns
That can ask a question,
In a sense where you do not know the name of the noun.

But I know:
I have MINE,
and SHE has HERS,
and HE has HIS,
Do YOU have YOURS?
THEY love US,
and WE love THEM.
What's OURS is THEIRS--that's how it is with friends.
And pronouns, you are really friends, yeah!
'Cause saying all those nouns over and over
Can really wear you down.