From:  The Backlot
If you liked Rent, then you should check out… 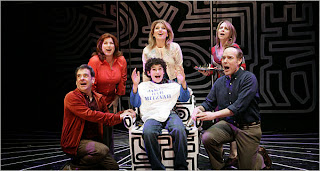 When William Finn and James Lapine‘s groundbreaking musical opened on Broadway in 1992, it was one-of-a-kind: the story of a gay man who comes out to his wife and son and deals with love and loss in the early years of the AIDS epidemic. Pithy, funny (with songs like “Four Jews in a Room Bitching”), and extremely moving, the music and lyrics still hold up today. Do yourself a favor and pick up the original cast recording, or try to find a local production near you.

Email ThisBlogThis!Share to TwitterShare to FacebookShare to Pinterest
Labels: Beyond “Brokeback”, Broadway, musical