Steven Beckett by Ian Cole
From: The Underwear Expert 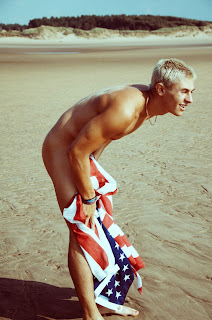 Steven Beckett pledges allegiance to the United States of commando in this photo by photographer Ian Cole. The photo was part of Cole’s Confession of a Male Model series featuring many models. In the Steven Beckett series, the bleach blonde Beckett spends the day at the beach, appearing in many looks. His patriotic outfit, however, stands out. It’s an ode to the land of the free…free of clothing.
Posted by Daniel at 9/14/2013 07:25:00 AM