13 Identical Twins
From: The Backlot 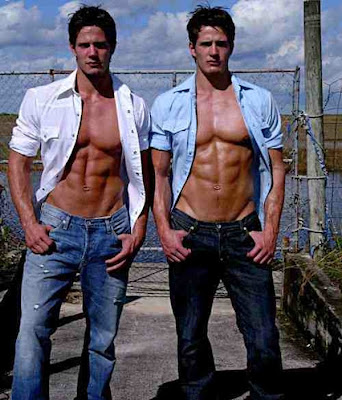 Lane and Kyle Carlson
Kyle and Lane Carlson (born December 24, 1978 ) are identical twin brothers known collectively as the Carlson Twins. The Carlson twins work together as male fashion models.
The twins were born in Stillwater, Minnesota, United States,  Kyle six minutes after Lane. The Carlson twins grew up with two older siblings, Aaron and Michelle, and a younger sister, Lynnaya. The brothers attended Stillwater High School and both graduated from Winona State University.
The brothers began their modeling career when Lane was "discovered" in a mall in La Crosse, Wisconsin. The twins have since become internationally successful models. As with the Brewer twins, the Carlson twins first received public attention after modeling naked for photographer Bruce Weber.
The Carlson twins have worked for Armani, Out magazine and Abercrombie and Fitch, with the popularity of the twins increasing after they appeared together in Abercrombie and Fitch's now discontinued catalog, A&F Quarterly (Spring Break 2001). At the peak of their careers, the Carlson twins frequently worked as underwear models, with Calvin Klein reputedly preferring Kyle to front the company's underwear campaigns.
In 2002, Lane appeared as a contestant on NBC's Fear Factor; although he made it to the final round of the series, he did not emerge as the winner.
In 2005, the Carlson twins appeared on the WB Television Network's comedy program, Mobile Home Disaster.
In 2007, Kyle was regularly featured on the HGTV program, Deserving Design, with Vern Yip. Kyle's primary role role on the program involved carpentry.