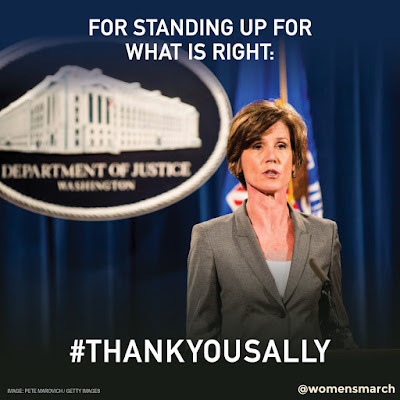 The White House on Monday fired acting Attorney General Sally Yates for telling government lawyers not to defend an executive order signed by President Donald Trump suspending immigration from seven countries out of concerns that terrorists from those countries might enter the U.S. Ms. Yates learned of her firing Monday evening, in a letter from the White House hand-delivered to her office, according to a person familiar with the matter. In a statement, the White House said Ms. Yates “has betrayed the Department of Justice by refusing to enforce a legal order designed to protect the citizens of the United States.” Dana Boente, the U.S. attorney for the Eastern District of Virginia, will be acting attorney general until Mr. Trump’s attorney general nominee, Jeff Sessions, is confirmed by the U.S. Senate, which could happen next week.

Worth noting that Sally Yates was confirmed as deputy A.G. by a Republican Senate 84-12. Republicans cited her willingness to be independent as her strength. Sen. Bob Casey tweeted, "Sally Yates did not betray the Justice Department, she honored its greatest traditions by defending our Constitution."

Ironically, incoming attorney general Jeff Sessions asked Yates during her Senate confirmation hearing in 2015 if she should say no to an unlawful executive order. Hear what she said HERE.
Posted by Daniel at 1/31/2017 05:54:00 PM