Plus, a portion of the proceeds will go toward liberal causes.
From: NewNowNext

A pair of Canadian designers are protesting Trump’s imminent presidency not with letter writing campaigns or calls to the White House, but with underwear. 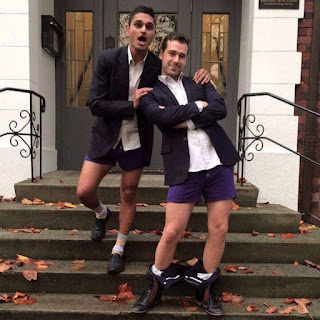 Vancouver entrepreneurs Matthew Paish and Sarbjit Gill were in the midst of developing an underwear line when it was announced that Donald Trump would be the next president of the United States. The pair, ardent liberals with a sense of humor, quickly dropped their plans and began work on something a little more political.

“The election left us stunned,” the duo said. “We are still in shock; presumably, so are many others who care about equal rights and justice for all, whether they are Black, White, Asian, Muslim, Mexican, part of the LGBTQ+ community or other.”

With their moods “mired,” they set out to create a pair of “undies for humanity,” called the Protest Pair, which they’re currently funding through Kickstarter.

“The underwear features a buffoon yelling into the abyss, holding a megaphone in his teeny-tiny hands,” they write. “’Blah blah blah blah blah’ is written all over to represent his tweets. There’s also a horizontal fly thoughtfully placed over Mr. Trump’s mouth for easy access when nature calls.” 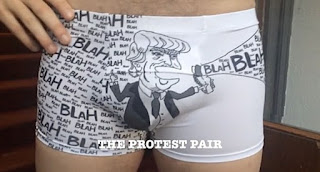 The campaign isn’t just about buying a funny set of underwear, though. According to the Kickstarter, Paish and Gill will be using some of the profits to make regular personal donations to Planned Parenthood, Refugee Assistance Project, NAACP Legal Defense and Education, Trevor Project for LGBTQ Youth, Southern Poverty Law Center, Mexican American Legal Defense and Education Fund.

“The founders…will make personal donations to these causes on behalf of Mr. Donald Trump, Mike Pence and Paul Ryan, and send donation certificates to their respective offices,” they explain. “Plus, we’ll tweet @realDonaldTrump with each $5 and above pledge.”

Watch their kickstarter video below and snag a pair of the Trumpified boxer briefs, here.