Are Bryan Singer And Olympic Diver Chris Mears A Thing? 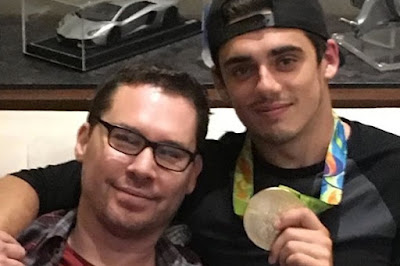 The last we heard from famed X-Men producer/director Bryan Singer, he was announcing his upcoming fatherhood with best friend and Queer As Folk actress Michelle Clunie.

While we don’t have an update on Dashiell Julius William Clunie-Singer, who will be celebrating his second birthday soon (time flies), there is a potential bit of news in another area of Singer’s jet-setting life.

And hey, maybe “chummy” is as far as it goes with the pair, but the interwebs have taken notice of the apparent intimacy in the snapshot.

“Bryan’s hand is on Chris’s arm and it look like his other arm is laying on his leg. That’s a couple pose,” said one sleuth in a comment thread committed to the topic.

“They’ve been ‘friends’ for a while,” pointed out another amateur Sherlock, directing attention to a Twitter photo from May of the two:

Amazing to catch up with @BryanSinger tonight at the European Championships! Good luck with the new X-Men film 👊🏽 pic.twitter.com/P9pn2KU5qC
— Chris Mears (@ChrisMears93) May 12, 2016

We’ll have to leave it up to you to draw your own conclusions, but we can certainly understand Mears’ appeal:

Then again, Mears isn’t the first British diver to be spotted with Singer: