"I love the Second Amendment."

A gay couple is receiving backlash and death threats after an interview they did with the Wall Street Journal at a Trump rally in Ohio went viral earlier this month.

Dewey Lainhart and Cody Moore were described as “uneducated” and “rednecks” by viewers of the video, with many believing they are “traitors to the gay community.”

More intense posts compared them to “Jews who support Hitler” and declared that they deserve “two bricks directly into their faces.” 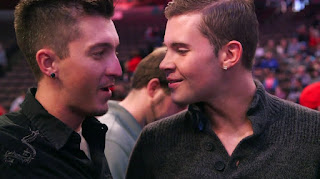 Lainhart and Moore say they were threatened to not come out of the house and warned against going to any gay clubs.

The couple told reporter Jason Bellini that they don’t regret doing the interview, but admitted that it put a damper on the excitement they felt over their recent engagement.

As for the death threats, the Trump supporters aren’t worried.

“It doesn’t concern me,” said Lainhart. “I look over my back, and I do carry [a gun]…because I love the Second Amendment.”

Although receiving death threats because of their political views is an ugly reflection of our current social media culture, most people simply expressed disappointment that gay men would support a campaign that has encouraged bigotry.

A recent poll shows that almost 75% of gay voters will be voting for Clinton on November 8, but there’s still a quarter who seem to think a vote for Trump is not a threat against their rights.