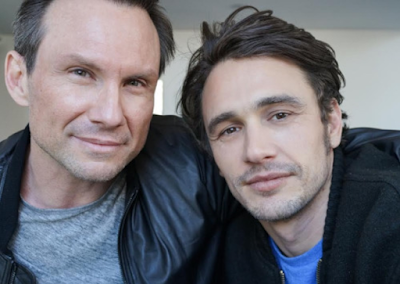 This just in: Christian Slater is a very competitive person. Especially when it comes to shooting gay sex scenes in movies.

While speaking at a Q&A after the premiere of King Cobra over the weekend, 47-year-old Slater spoke candidly about the film’s many, many, many gay sex scenes and how he didn’t want James Franco to get all the attention. So he improvised a scene of his own.

“James was going to be doing the lion’s share of the sexual aspects [of the film] and then I got competitive,” Slater said. “We even improv’d some stuff. OK, I’ll stop–but, yeah, great direction!”

That when director Justin Kelly chimed in to add that Slater and actor Garrett Clayton had one spontaneous moment when “[Christian] pushes him up against the closet door… That was not written or planned. That [was] Christian saying, ‘Where’s my gay sex scene?’”

“Garrett was damn cute,” Slater added, jokingly. “Let’s get honest about it here.”