From: Boomer Beefcake and  Bonding 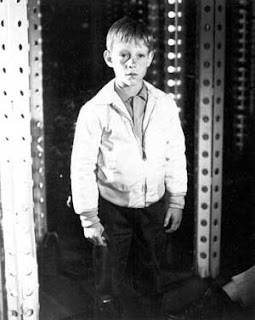 The early 1960s were all about children.  Two of three households in the United States contained children under age 18.  Entire neighborhoods were occupied by families with young children, with occasional elderly or childless couples (adults who lived alone were practically unheard of, and suspect).

31% of the U.S. population was under the age of fifteen, and 12% was under age five.   There were more elementary and high school students than ever before in history, and the number was increasing every year.  There were 1,393,000 teachers and 64,000 principals, the highest number ever.   Educational theory was big business.

The mental and emotional health of children was also a big business. Childhood was laden with infinite perils.  One false move -- a word said or left unsaid, a punishment too lenient or too severe, a hug or the lack of a hug, a school trip forbidden or allowed -- and the child would be sent careening into homicidal madness, or turn gay (which, in the mindset of the 1960s, was about the same thing).

Many movies and TV programs of the era involved kids with an aberrant sexuality being threatened or threatening the adults.

On a 1960 episode of The Twilight Zone, Billy Mumy, soon to star on Lost in Space, plays a boy who can do anything.  What he does is  force people to obey his every whim.  Rebellion results in symbolic castration or death.  "You had him!" one of the townsfolk complains to his mother before trying to kill him. "You had to go and have him!" 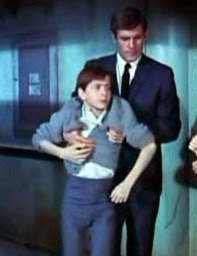 In Let’s Kill Uncle (1966), oddball outsider (that is, gay) Barnaby Harrison (Pat Cardi, who would go on to star on It's About Time) is heir to the family fortune, so his evil uncle tries to kill him.  Since no adults believe him, he fights back in the only way he can think of: he and a gal pal try to kill Uncle back. 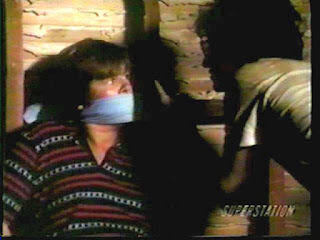 The Gay Rights Movement didn't change the myth of the evil gay kid.  By the 1970s, threatening or threatened aberrant sexuality was everywhere. Lee H. Montgomery and Mark Lester made their careers playing sexual outsiders who plot murder or are murder victims. In Bad Ronald (1974) Scott Jacoby plays a mother-obsessed (that is, gay) sexual outsider who wants a girlfriend, but nevertheless kidnaps and fondles the hunky Duane (Teddy Eccles). 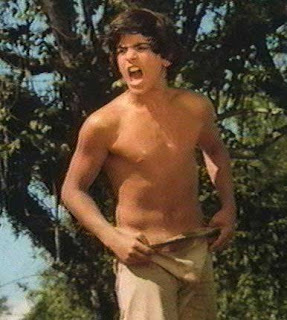 In The Kid and the Killers (1974), oddball outsider (that is, gay) Miguel (Gerry Ross) wants revenge on the men who killed his sister, so he approaches a bounty hunter named Roper (Jon Cypher). After torturing and trying to kill him, Roper agrees to help, but his disgust at Miguel's increasingly overt displays of homoerotic interest almost compels him to abandon the mission.