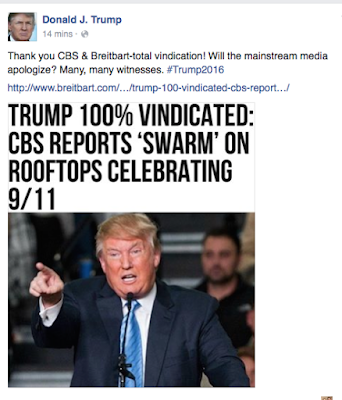 This (left) is how Donald Trump—presidential contender—is spending his time during the news of the San Bernardino mass shooting: Trying to prove his widely disproven claim to have SEEN thousands and thousands of Muslims celebrating in Jersey as 9/11 unfolded. Breitbart unearthed a report of eight men in Jersey arrested who had allegedly been celebrating on a rooftop. I won't link Trump's Facebook or Breitbart, so Google it—you've never seen so much arguing over the word swarm, which was undoubtedly used pretty casually by the reporter who first used it.

Also, Trump has granted an interview to batshit-crazy Alex Jones, one of the most insidious conspiracy theorists alive.