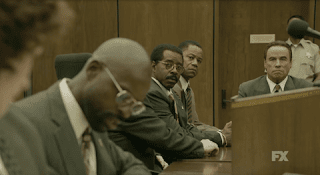 Ryan Murphy is taking a look at ‘the trial of the century’ in his next television foray, American Crime Story: The People v. O.J. Simpson.

The first trailer for the spin off of Murphy’s American Horror Story series hit the internet today and it sizzles with star power and infamous moments you may recall, plus one-liners that zing like, “Nobody gets killed in Brentwood.”

American Crime Story will debut on FX on Tuesday, February 2.

Watch the trailer, below: