Could these two BE any cuter?
From: NewNowNext

How was your weekend? Relaxing? Did you get a lot done? Did you clean up the apartment… finally? Well, I don’t know about yours, but judging from the looks of Zachary Quinto and Miles McMillan’s weekend, there’s was perfect. 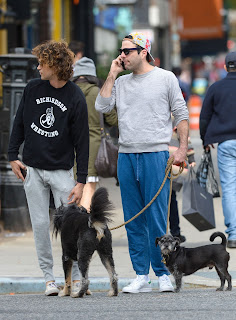 The two were spotted in downtown Manhattan on Sunday morning rocking sweats and cell phones, taking a light stroll with their two rescue pups, Noah and Skunk. (The two reportedly moved into their new $3.2 million apartment earlier this month.)

After making several appearances on television hows like Girls, Hannibal and of course his crowning achievement as the slapper in NBC’s short-lived The Slap, Quinto is returning to the silver screen, starring in the upcoming Star Trek Beyond as well as appearing as Glenn Greenwald in Oliver Stone’s political thriller, Snowden.

McMillan’s made sure Quinto isn’t the only breadwinner for the family, maintaining his top model status walking in Jeremy Scott’s show during NYFW.

It's always a blast to walk @itsjeremyscott show in New York! 🐁@carlynecerfdedudzeele @eugenesouleiman #nyfw
A photo posted by Miles McMillan (@milesmcmillan) on Sep 14, 2015 at 2:48pm PDT