Five Things To Watch For During Pope Francis’s U.S. Visit 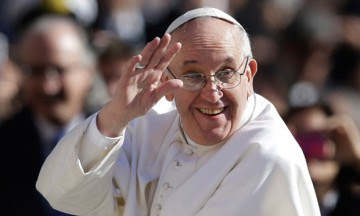 Pope Francis arrives in the U.S. today. It’s his first visit to the U.S., not just as pope, but ever. In a short time, Francis has manage to change the image of the Church while leaving its doctrines entirely untouched. Officially, being gay is still a moral disorder, but Francis has somehow swaddled hard teachings in soft language. As a result, instead of being greeted by protests, activists are holding off and watching the pope with an air of hopeful anticipation.
Following the Vatican is a bit like trying to decipher the inner workings of the Soviet-era Kremlin. It’s all about reading the signals. Don’t expect any earth-shattering announcement from the pope during his stay in the U.S. But here are five signs to keep an eye out for. They would suggest just how serious Francis is in pushing for a more tolerant attitude toward the LGBT community.

How does Francis respond to the array of gay guests that the White House has arranged for him to meet?
You have to hand it to the Obama Administration. They aren’t afraid of in-your-face tactics, even with the pope. The administration deliberately chose a guest list that represented everyone the pope wouldn’t otherwise meet, including  Episcopal Bishop Gene Robinson, who is openly gay, and Aaron Ledesma, a 23-year old whose blog is The Gay Catholic. Robinson and Ledesma will be among a throng of several thousand  at a reception on the White House lawn, so the pope may never get to meet them. But if Francis acknowledges, directly or indirectly, the diversity of the guest list, that would be a sign that he’s more welcoming than his predecessors.
Does the pope keep Philadelphia Archbishop Charles Chaput at arms’ length?
Chaput is one of the most homophobic bishops in the U.S. hierarchy, which is quite a statement, given the competition near and far. Chaput is hosting Francis’s visit to the City of Brotherly Love and made sure that the only gay within sight is one who is celibate. The bishop ensured that there was zero LGBT representation in conference about families leading up to the pontiff’s trip. The question is whether Francis will rebuke, gently or otherwise, the hard-line tactics of Chaput or send a signal that he wants a less rigid approach.
Does the pope make any statement about marriage equality?
Based on his past remarks, anything the pope says about marriage equality is bound to be critical (and insulting). But if he chooses to be silent on the topic, that might speak more loudly than a rote condemnation.
Will Francis wade into the religious liberty debate?
Francis has apparently agreed to address the topic on Saturday. But will the pope use the same kind of culture war rhetoric that evangelicals and the U.S. bishops have been wearing thin from use? Nothing short of beatifying Kim Davis will satisfy the hard-core religious liberty proponents. It will be interesting to see if the pope stops well short of encouraging disobedience of the law.
Does Francis tip his hand about the upcoming synod on the family?
If the Church is going to shift its policies, the synod, to be held next month, is the place where it will happen. The list of delegates chosen by the pope to attend the synod suggests that perhaps the Church will begin to soften its opposition to anything LGBT. (A draft document that suggested that we might be human after all caused heads to explode among the right-wing bishops.) Watch for any references the pope makes to the synod. They would be well-considered comments intended to send a message about what’s about to happen .
There is one bonus observation for the pope’s visit: Do conservative Catholics rend their garments and gnash their teeth?
A lot of the self-assigned keepers of the faith are aghast that the pope believes in climate change, advocates for the poor and is more conciliatory than condemning. Keep an eye on how the Bill Donohues of the world respond to the pope’s visit. If you here a lot of rueful talk about the pope “sowing confusion,” you know it’s been a good trip.
Posted by Daniel at 9/22/2015 09:30:00 AM