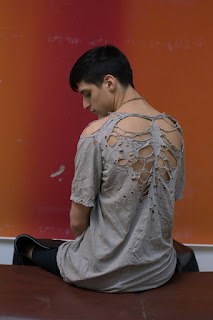 25-year-old Alejandro Ghersi’s fingerprints are all over the music he produces. When he’s not teasing sonic electricity out of his own recordings as Arca, he’s writing and producing for others, most recently Björk. Working on Björk’s latest and playing a string of shows with her in New York has been a dream come true for Alejandro, but one he was well-prepared for. BUTT was absolutely entranced by his twink-meets-dominatrix stage persona, the perfect foil for his gargantuan and lumbering live PA, a sound which is as challenging — and downright freaky — as it is groovy. Alejandro and photographer Wolfgang Tillmans got together in London to talk nuts and bolts.

Wolfgang: So you studied fine art at Cooper Union, no?
Alejandro: I actually always wished that I had studied fine art or that I went to art school, but I studied audio engineering. I speak English the way I do because when I was in pre-school, my family lived in Connecticut for maybe four or five years. My dad would commute to New York. We were like the only non-white family in our neighborhood. My mom was trying to speak English, but she was pulling her hair out. We moved back to Venezuela.
And was Venezuela under Chavez then?
Yes, he had just got into power. I did the rest of elementary school, middle school, and high school in Venezuela, and then I graduated, and I went straight to NYU. It had already gotten to the point with Chavez that anyone who could afford to send their kid abroad to study would do it. Things were not looking that good, and there were lots of student protests. So I got to NYU and I studied audio engineering.
How did you get in?
You have to jump through a lot of hurdles. To apply as an international student, you have to have like — my dad hired this lady who was from the American school to help me put the application together. It’s really an insane process. I actually wanted to go to Columbia for philosophy, but I didn’t get in. I felt terribly defeated. So I spent a year at NYU studying music theory. Then I declared my major as audio engineering, and like music production — to run a big board.
Ah, so you really learned the fundamentals?
Yeah, like how to cut tape with a tape machine, and every kind of microphone, every kind of like compressor.
Like how an Electret condenser microphone works.
Yeah, it helped me a lot with my own music because I was never a gear head. I always felt different than some of the other engineering kids — they really loved the gear. I learned everything that I was interested in learning, and that was really useful. My mom was like, ‘Study something that you know might give you a little bit more money,’ but I was like going to NYU just as an excuse to be in New York and get out of Caracas.
So you were learning these techniques even as that big studio recording approach became redundant?
It had already become completely redundant. We were all in the class knowing that we would never use a ticket sheet, or knowing that we would never have access to big analog mixing board. But I don’t think anyone felt cheated by that, I think everyone was just kind of grateful.
Yes, I guess it’s the same with photography in that colleges still run analog dark rooms.
You teach where people are with technology, plus a little bit more. There were two teachers that really changed my life. One of them was Nick Sansano, who had produced Sonic Youth’s ‘Daydream Nation’, and the other one was Bob Power who did ‘Brown Sugar’ by D’Angelo. I was obsessed with ‘Brown Sugar’ and ‘Voodoo’, those two records. Running a session and being really quick, it’s a lost art. Like knowing when to do what. Sometimes all you have to do is hit record. Other times you have to hide the fact that you’re creating an illusion, and maybe bring up the singers strengths and hide their weaknesses — all the stuff that goes on in the studio that a singer shouldn’t even know about. I like that part of it, like the psychological… And the history of recording, like how Phil Spector used to do it. All of that is gold, you know?

I had no idea how deep your involvement in the production side of things went. These days, there are so many ways of distributing music, and at the same time, less and less people want to pay for it. How does that work financially?
I got into what I do because I like to kind of do this strange dance with myself, inside my own head in the dark, you know? Privately, in a room, alone. But when you achieve a certain level of attention, you’re expected to play large shows, or you’re expected to share it in a public setting. And that’s great, I happen to enjoy it. But for some musicians, maybe like the introverts, this environment isn’t really good for them.
Yes, but the only way to make money is—
Playing live shows… And Darwanism takes its toll first and fastest on those kinds of people that might make extremely beautiful music that maybe no one buys. So they have to pick up a second job. And the world could probably benefit now from a bit more introvert energy, you know?
Yes.
These kinds of creators are suffering the most.
Because you have to broadcast yourself to reap the benefit of—
Like these guys doing really nerdy online forums where there’s just so much heart behind it, but they’re like broke. If the environment is like, you know, really healthy and supportive just for people that love to expand, and it’s not really fertile for people who are all about growing inward, of course they’re at a disadvantage.
Any call for solidarity with music completely disappeared now. In the ‘70s and early ’80s, on the back of records, there was a little skull and crossbones with the skull being a cassette tape, saying ‘home taping is killing music’. But nowadays, there seems to be no sense of duty. We need to feed these musicians somehow. Through my record buying years, I would spend fifty euros a month or something, even as a student. Nowadays, I certainly don’t spend fifty. I do buy records now, but more out of, well—
Duty, responsibility…
Yes, responsibility, and also—
Your conscience.
And I also find it easier to actually have it than download.
I totally agree with you, but like, as soon as I start thinking about it, I just switch off… If you’re thinking about the practice of your work, you have to pick and choose your battles, and that one is such a rabbit hole. The only reason I mentioned the suffering introverts is because I want to protect them. I’m very lucky this year to do what I want to do. I’m always an optimist, and so I think the fact that even though making music can be so high-pressure — like the walls are pushing in on musicians — I have enough faith in music to do something that will survive it. It’s like, you know how diamonds are created under pressure?
Yes.
There are those people who are weaker in one way, but they have an immense strength and create some beauty that we will never see. They’re in their mother’s basement, and they have like two jobs and they just don’t have time, or they’ve lost hope — that’s the scary thing, when musicians lose hope.