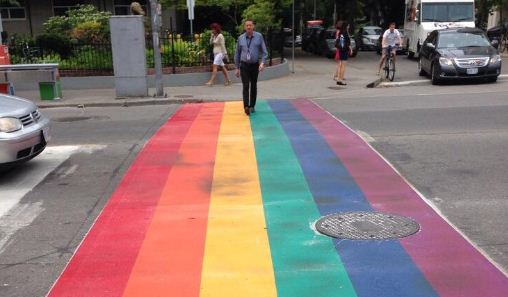 Toronto is hosting World Pride 2014 from June 20 to June 29, but th Canadian capital has already rolled out a welcome to the global LGBT community by painting crosswalks in the Gay Village with a bright rainbow. Located in the heart of the gayborhood at Church Street and Alexander and Church Street and Isabella intersections, the pedestrian paths are permanent additions to the landscape, approved by the Toronto city council in February, and join hundreds of banners announcing World Pride.

“The banners and rainbow crosswalks funded by the City of Toronto reflect the hard work, support and cooperation fostered between city officials, Pride Toronto and the community,” said Pride Toronto director Kevin Beaulieu.

Other cities with rainbow crosswalks including San Francisco, Vancouver and Sydney.

Here’s another shot of the intersection:

Toronto has installed rainbow crosswalks on Church street, in the heart of Toronto's LGBTTIQQ2SA* village! pic.twitter.com/M81UAnLOYK
— WorldPride 2014 TO (@WP14TO) June 5, 2014