10 Iconic Foods of New York City, and Where To Find Them

From: The Village Voice 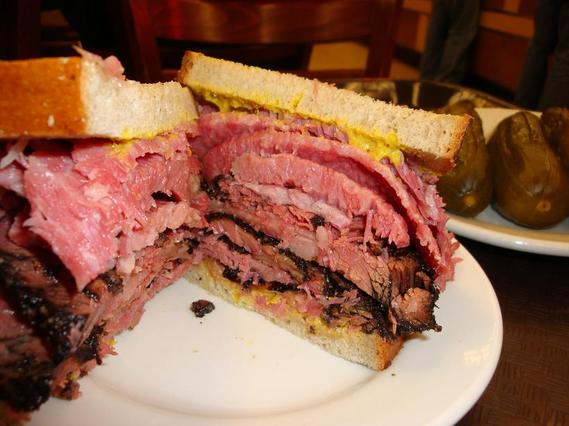 3.
Pastrami and Corned Beef Sandwich
Those who arrive in New York City for the first time are often happily directed to Katz's Deli, founded in 1888 and dating to the German (and German-Jewish) heyday of the Lower East Side. The multiplicity of beef brisket presentations is amazing in itself, but load up a sandwich of smoky pastrami and briny brisket on rye or a club roll and experience cured-meat nirvana. The pickles are free (choose a combo of half-sour, sour, and pickled green tomatoes), and you don't need anything else except for a can of Cel-Ray soda. (That means skip the limp, greasy fries. Believe me, you don't need the calories.)
Katz's Deli, 205 East Houston Street, 212-254-2246
Posted by Daniel at 6/14/2014 09:39:00 AM