I haven’t had the best luck with queer cinema. While I’m well-aware that there are good gay films somewhere out there, I’ve had the worst luck in picking them out. Last weekend, I made the mistake of ordering G.B.F. on DIRECTV after reading Boy Culture‘s rave review. It wound up being a schlock of Mean Girls wannabe crap. Despite an interesting premise, the film suffered from lackluster writing that was neither realistic nor self-aware enough of its own ridiculousness. Perhaps my expectations were too high? All I know is that I wouldn’t recommend it to you, my dear readers…

And, of course, here’s where you come in! I’m determined to find a decent gay movie before the end of the year, and coincidentally, TLA Gay is running a 25% off sale for any four items in their online store. I’d love to hear any recommendations you might have, and if you've seen any of the seven flicks below, feel free to chime in with your thoughts in the comments section. 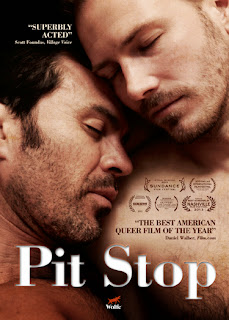 PIT STOP
DESCRIPTION
Set in a small Texas town, two lonely men struggle through relationships until one day they meet each other. A refreshing, intelligent drama about two very un-stereotypical gay men.

WHY I WANT TO SEE IT
Initially, I was annoying by the inclusion of “two very un-stereotypical gay men” in this flick’s description. I’m getting the sense that the actual film doesn't flaunt how “un-stereotypical” the lead characters are in the forced, attention-seeking sort of way where they’re like, “Look! Look, you guys! Look at how un-stereotypical these guys are. They’re so NOT like the gays you see on Bravo.” If that were the case, it would annoy me… But, again, I’m getting the sense that’s not the case.
Posted by Daniel at 12/06/2013 07:21:00 PM

Email ThisBlogThis!Share to TwitterShare to FacebookShare to Pinterest
Labels: 7 GAY MOVIES THAT MIGHT NOT SUCK, beard, drama, hairy, movie