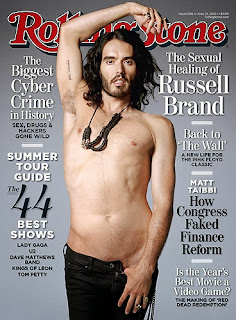 Russell Brand
June 10, 2010
Russell Edward Brand (born 4 June 1975) is an English comedian, actor, radio host, and author.
In 2004, Brand achieved notoriety as the host of Big Brother's Big Mouth, a Big Brother spin-off. In 2007, he had his first major film role in St Trinian's. In 2008, he had a major role in Forgetting Sarah Marshall; the film led to a starring role in Get Him to the Greek in 2010. He also worked as a voice actor in the animated films Despicable Me in 2010, Hop in 2011, and Despicable Me 2 in 2013. He was cast in the lead role for the film Arthur in 2011.
Brand has received significant media coverage for controversies such as his dismissal from MTV, his controversial behavior as a presenter at various award ceremonies, and his drug use. In 2008, he resigned from the BBC following prank calls he made to actor Andrew Sachs on The Russell Brand Show. He has incorporated his notorious drug use, alcoholism, and promiscuity into his comedic material.
Posted by Daniel at 11/03/2013 11:33:00 AM