The Hottest Men in Baseball 2013 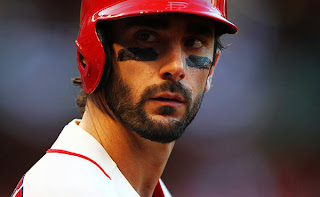 Ability: 4 bats
Looks: 3 bats
Age 27
In his first full season with the St. Louis Cardinals, intense and handsome Carpenter moved to cover second base, and became the team’s leadoff hitter. He excelled in the new position, leading MLB in hits, doubles and runs. In September, he broke Stan Musial’s 60-year old franchise record for doubles by a left-hander. Cardinals manager Mike Matheny told the St. Louis Post-Dispatch, “He has established himself as the best second baseman in the league.”
Posted by Daniel at 10/27/2013 03:08:00 PM