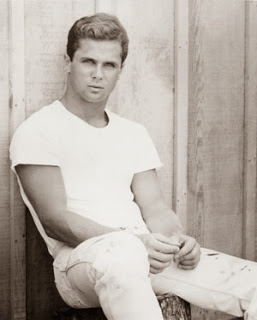 #16
Tony Dow
1945—
As the Beaver's big bro, Dow was all kinds of hot, made all the more so by his antiseptic surroundings. They say WWII brought homosexuals together and inadvertently helped spawn the gay movement. But Tony Dow brought homosexuals together, too, around their TVs; he may not be personally responsible for Stonewall or anything, but if he were a drag queen, we'd call him "sickening!" Leave It to Beaver (1957—1963), Mr. Novak (1963—1965), Never Too Young (1965—1966), The New Leave It to Beaver (1983—1989)

Tony Dow is considered the handsomest and hottest teen television star for that era in most polls. Look at the body and "package" on that kid! I believe this photo is circa 1962-63 when he was in his late teens. I had read Tony was well "enDowed". Not surprisingly, he had lots of girlfriends. There are good photos of him with some of his dates on the Internet.