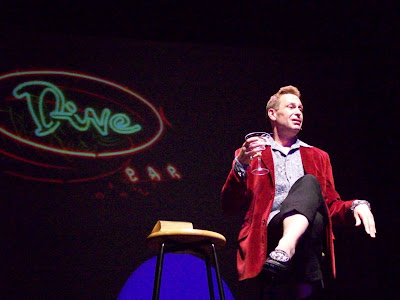 99
Buddy Cole (Scott Thompson)
The Kids in the Hall
(1988-95)
Charles Budderick Cole, popularly known as Buddy Cole, is a fictional character created and portrayed by actor-comedian Scott Thompson. He is an effeminate, gay socialite, made famous on The Kids in the Hall, a popular Canadian sketch comedy series and troupe of the same name.
Buddy has a penchant for going on long, comedic rants about his personal life and the gay community. He also frequently drops celebrity names, insinuating that he has many close friendships with the rich and famous. A series of The Kids in the Hall sketches portrayed his deeply personal relationship with Queen Elizabeth II (also played by Thompson).
During the second season of The Kids in the Hall, Buddy began to star in more action-packed sketches. In the first such appearance, he becomes the substitute coach of a lesbian softball team. From there on, his adventures became more outrageous and surreal, from accidentally murdering a drag queen (while on a bad acid trip) to purchasing his very own male slave in the 1950s. Still, for the most part, Buddy delivers monologues from his gay bar, Buddy's, which he purchased with money saved during a brief stint of not smoking cigarettes.
In the series' final episode, he is one in a handful of characters to get something of a resolution: having lost his bar in a game of strip poker (he refused to remove his shirt having just put on ten pounds), he burns it down in order to win back an old firefighter boyfriend. Also in the last sketch is a childhood photo of Kurt Cobain (an acquaintance of Thompson's), sitting on the bar as it burns down.
Thompson has described Buddy as a "butch queen" and an "alpha fag", pointing out that while extremely effeminate, Buddy is also very forceful and strong willed. Thompson, who is openly gay, has always directly confronted charges that Buddy is a homophobic stereotype. "The whole idea of Buddy Cole being considered a terrible stereotype and a terrible throwback is, I think, just tragic," he told Orlando Weekly in 2000. "I mean, most gay men are more Buddy than Sly."
According to the "Chalet 2000" episode of The Kids in the Hall, a full-length adventure starring Buddy and friends, Buddy is the nephew of comedian Rip Taylor.
Posted by Daniel at 7/02/2013 07:25:00 PM