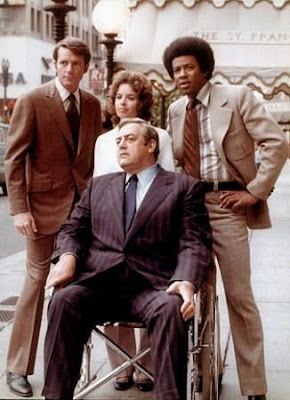 Ironside is a Universal television series that ran on NBC from September 14, 1967 to January 16, 1975. The show stars Raymond Burr as a paraplegic Chief of Detectives, Robert T. Ironside. The character debuted on March 28, 1967 in a TV-movie. When broadcast in the United Kingdom the show was initially titled A Man Called Ironside. The show earned Burr six Emmy and two Golden Globe nominations.

The show revolved around former San Francisco Police Department (SFPD) Chief of Detectives Robert T. Ironside (Raymond Burr), a veteran of more than twenty years of police service who was forced to retire from the department after a sniper's bullet paralyzed him from the waist down, confining him to a wheelchair. In the pilot episode, Ironside shows his strength of character and gets himself appointed a "special department consultant" by his good friend, Police Commissioner Dennis Randall. He does this by calling a press conference and then tricking Commissioner Randall into meeting his terms. Ironside uses an attic floor room (for living and office space) at the SFPD headquarters and made use of a specially modified and equipped Ford police truck. This is replaced in the episode titled "Poole's Paradise" after the truck is destroyed by Sergeant Brown as part of a way to frame a corrupt sheriff. At the end of the episode, the truck is replaced by a modified day van to accommodate Ironside's wheelchair. In the pilot he requests that Ed Brown and Eve Whitfield be assigned to him. He later recruits the angst-filled African-American ex-con Mark Sanger to be his personal assistant after Mark is brought in as a suspect who wanted to kill Ironside. The show became a success as Ironside depended on brains and initiative in handling cases.

Supporting characters on Ironside included Det. Sgt. Ed Brown (Don Galloway), and a young socialite-turned-plainclothes officer, Eve Whitfield (Barbara Anderson). (Eve's clothes were far from plain as she often changed stylish outfits from scene to scene.) There was also delinquent-turned-bodyguard/assistant Mark Sanger (Don Mitchell), who also opted to become a police officer and subsequently graduated from law school (night classes were mentioned from early on) and even married late in the run of the series. Commissioner Randall was played by Gene Lyons.
By the show's fourth season, Anderson left the show over a contract dispute (at the same time she was getting married) and was replaced by another young policewoman, Fran Belding (Elizabeth Baur), who filled much the same role for four more years.

The show enjoyed an eight-season run on NBC, drawing respectable, if not always high, ratings. As the eighth season began, Universal released a syndicated rerun package of episodes from earlier seasons under the title The Raymond Burr Show, reflecting the practice of that time to differentiate original network episodes from syndicated reruns whenever possible. Upon NBC's mid-season cancellation, however, the syndicated episodes reverted to the Ironside title