Busted and facing a host of charges
From: Gay Pop Buzz 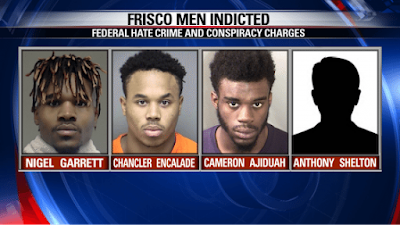 In Texas, four men face felony charges for posing as gay while using the hook-up app Grindr to assault and rob people.

“Anthony Shelton, 19; Nigel Garrett, 21; Chancler Encalade, 20; and Cameron Ajiduah, 18, were named in a federal indictment on Wednesday that charged them with conspiring to assault the men because of their sexual orientation.


Claiming to be one gay man, the suspects would arrange meet-ups with men at their homes in the Dallas suburbs of Plano, Frisco and Aubrey. They allegedly staged four home invasions between January 17 and February 7.


Upon entering the victim’s home, the defendants assaulted the victim, restrained the victim with tape, and made derogatory statements about the victim being gay,” the U.S. Department of Justice said in a statement.”

Allegedly, the men were armed during the home invasions and would steal automobiles and other property. The four have also been charged with conspiracy, kidnapping, carjacking and possession of a firearm.

Current law states that this type of hate crimes carries a maximum penalty of life in prison plus $250,000 a fine. According to local reporting, a grand jury returned an 18-count indictment against the men related to four incidents that happened in Plano, Frisco and Aubrey, Texas.

Last week, GPB reported that Marlyland police nabbed two men who were using gay hookup apps for similar reasons. In April, another man was charged in Florida for trying to kidnap and rob a man, plus steal his dog.

In an effort to help gay men using hookup apps remain safe, many LGBT focused websites have published guides on how to minimize the possibility of problems. For example, Pink News has a 15-point post with practice insight with an eye towards prevention. You can review this guide by clicking on this link.
Posted by Daniel at 5/14/2017 09:36:00 PM