WE NEED TO TALK ABOUT PrEP 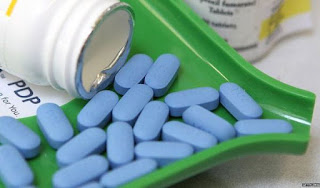 Since its first appearance in the 1980’s, AIDS has been an indomitable force in sex and politics changing how we meet and the language we use. That history goes great lengths toward explaining differing and often negative reactions to Pre-exposure prophylaxis (more commonly known as PrEP).

When taken as prescribed, PrEP significantly reduces the risk of contracting HIV by more than 90%.

By and large, the most frequent criticisms of the regimen strike at the core of how the LGBTQ community changed during the AIDS crisis. While sex wasn’t stigmatized, categorized or associated with death before AIDS, it’s now intrinsically intertwined with discussions about health, safety and consequences.

Introducing a drug that some view as a “magic pill” that could return the community to its pre-condom roots doesn’t sit well with many people.

Ryan Tappin, a nurse practitioner who works in HIV prevention research at Fenway Health in Boston, touched on this when I spoke to him about HIV and PrEP.

“Being prescribed PrEP is a piece of what should be an individualized, sex-positive approach to HIV and STI prevention,” he explained. “When a patient is interested in PrEP, I don’t start the conversation about number of partners they’ve had or what their condom use is like. I first ask what their health goals are and how do those fit into their overall well being.”

He added, “This not only opens the discussion to talk about what behaviors they may do that increases their risk of HIV but also helps frame the conversation for what will empower them to make the best HIV prevention choices for them.”

Doctors recommend PrEP plus condom use as the best method for HIV prevention but know that many will choose one or the other (or neither). Framing the conversation to remove shame from sex is important as PrEP is a vital weapon in the fight against AIDS. This is particularly important given recent studies showing that rates of condom use have declined.

Just as women are categorized as ‘sluts’ and ‘whores’ for using birth control, many in the LGBTQ community label those on PrEP using similarly derogatory terms tinged with moral judgment. While many of the criticisms focus on the transmission of HIV, others unnecessarily conflate hetero-normative relationship standards with health and vitality.

Luis Loya of Cambridge, Massachusetts touched on this speaking about being on PrEP.

“I have witnessed negative attitudes when talking about PrEP in a more general way,” he said. “Everything from ‘but wouldn’t that just encourage someone to be reckless’ to slurs like ‘Truvada whore.’”

“Truvada whore” is among the most common derogatory labels PrEP users experience. It’s a label many taking the regimen have already begun reclaiming as a badge of honor to help combat slut-shaming and PrEP stigma.

Loya compared PrEP stigma to a larger conversation about classism arguing, “The conversation around PrEP is often a mirror of the conversation around reproductive health for women.  Everything from the slut-shaming, to the assumptions of promiscuity, and social/economic benefits around increasing access.” He added, “When Hobby Lobby is allowed to deny employees access to birth control in the name of religious freedom, they open the president to deny gay men access to PrEP.

“This hurts people in deep and irreparable ways, and it makes no financial sense to insurers. Pregnancy and HIV management are far more costly than prevention,” Loya concluded.

Whether in policy making or social conversations, offering moral judgments on sexual behavior has consequences.

The Consequences of Stigma

KC – a gay man in a red state who works in a public-facing leadership role – spoke about the stigma that accompanies being on PrEP and how moral judgments affect him.

“My partner and I have a playful, semi-open relationship, so when we first began to hear about PrEP, we knew we needed to be on it,” he explained.  “We have been taking PrEP for three years now.  We are not overly promiscuous – we don’t fit the image of what some people derogatorily call ‘Truvada whores’ – but to say our sex lives have been reinvigorated is a bit of an understatement.”

Despite that, public discussion about PrEP could affect his career and social contacts. “I cannot really discuss my experience with PrEP as openly as I would like for fear not just from the religious right but even from slut-shaming by other gay men right here in our state,” KC said.

The stigma surrounding PrEP mirrors the reaction many in the LGBTQ community had when the medical community announced in 2014 HIV transmission was diminished to nearly zero for HIV-positive individuals with undetectable viral loads.

A large international study of serodiscordant couples demonstrated that antiretroviral therapy (ART) reduces the risk of infection by over 90%. The study explicitly looked at the effectiveness of ART by recruiting couples who engaged in condomless sex at least a portion of the time where the HIV-positive partner was on an ART regimen.

Two years after the release of that study, the data continued demonstrating the same conclusions.

A substantial portion of the LGBTQ community reacted negatively because of the slut-shaming stigma attached to sex (particularly condomless sex). This reaction occurred despite  statistics backing one of the most important announcements of the last decade: an effective way to curb new infections. That’s the thing about stigma though; it’s tied to emotion, not facts.

To combat stigma, organizations like Mr. Friendly and Positively Aware work ardently to erase HIV (and PrEP) stigma. Only by addressing fear and stigma directly can people begin to discuss best sex practices without moral judgment.

JP in Boston experienced this first hand when he began PrEP two years ago.

“I was honestly shocked after talking to many friends about the prospect of starting PreP, both those who are HIV negative and positive,” he said. “It was the negative guys who immediately went into slut-shaming rhetoric.”

“Positive guys were more inclined to say I was stupid to not be on it,” he continued. “Many advocated that both PrEP and condom-use should go hand-in-hand, but they too understood that in-the-moment circumstances do play a role. I thought HIV-positive guys would be similar if not more judgmental than negative guys when it came to the shaming or resistance to PrEP, clearly that wasn’t the case.”

Just as visibility and discussion brought LGBTQ civil rights into the mainstream, open dialogue appears to be the solution to PrEP stigma as well.

JP noted this commenting, “I still see and hear a lot of shaming in the gay community, but as more and more gay men start the regimen, there is more opposition to that shame mentality, kind of like ‘mind your own business’ … So the more that education continues to happen, perhaps less shaming will ensue.”

JP concluded, “But at the end of the day I love our culture because we also lean into confrontation with 100% sass and irreverence. And if it weren’t for those unique qualities I would never have seen the hilarious, unapologetic, fashion t-shirt emblazoned with ‘Truvada Whore’ in Provincetown this past summer.”

With the haphazard way the Trump administration is handling health care, tackling HIV and PrEP stigma is more important than ever. Several weeks into the new administration, HIV awareness information is still conspicuously missing from the White House website as is the Office of National AIDS Policy.  Reducing PrEP (and HIV) stigma through open dialogue paired with education is a key first step.

Moreover, removing moral judgment of relationships and sex habits is the only path forward in bringing everyone into the conversation. Slut shaming only serves to judgmentally silence others. We’re better than that.
Posted by Daniel at 4/08/2017 10:58:00 PM