The Alabama Supreme Court has given lawmakers the go-ahead to begin impeachment proceedings against Republican Governor Robert Bentley, who has been accused of having an affair with a female aide.

First elected in 2011, Bentley has been a staunch opponent of LGBT rights, calling same-sex marriage “a social experiment.” 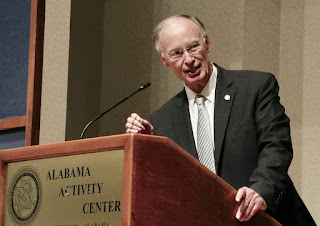 “I have always believed in the Biblical definition of marriage as being between one man and one woman,” he said in a statement shortly after the Supreme Court ruled in Obergefell v. Hodges. That definition has been deeply rooted in our society for thousands of years… The people of Alabama also voted to define marriage as between a man and woman. I always respect the people’s vote, and I am disappointed that the Supreme Court has disregarded the choice made by the people of Alabama in its decision today.”

In 2016, texts and audio recordings surfaced of Bentley making suggestive remarks to Rebekah Caldwell Mason, a senior aide in his office. Bentley and Dianne, his wife of 50 years, divorced later that year.

The governor, a former Baptist deacon, has ignored calls for resignation, apologizing for “making mistakes” without specifying any wrongdoing.

“I do not plan to resign. I have done nothing illegal. If the people want to know if I misused state resources, the answer is simply no. I have not,” he said from the steps of the state capital. 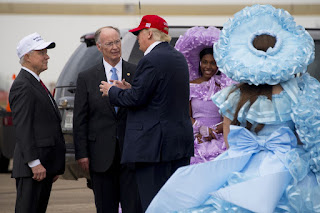 Last week, the Alabama Ethics Commission found probable cause that he had broken ethics and campaign laws, and there are allegations Bentley used state troopers to cover up the affair.

“Nobody’s love life is a political matter—unless you, as a politician, make your love life and your personal life a political matter,” Rachel Maddow said in 2016 about Bentley’s predicament. “He has been a crusading family values politician who has campaigned on the superior morality of his own marriage, his own family and his own family values, and how he’s going to save Alabama from other people’s terrible, immoral family choices because his values and his family are superior.”

The Yellowhammer State has a shameful history of homophobia under Bentley’s stewardship: A month after Obergefell v. Hodges, more than a dozen counties in Alabama still refused to grant marriage licenses to same-sex couples. (Alabama Chief Justice Roy Moore was actually suspended for telling state judges to continue upholding the state’s ban.)

And in March, the Alabama House advanced a bill that would allow faith-based adoption and foster-care agencies to turn away same-sex couples.
Posted by Daniel at 4/10/2017 05:27:00 PM