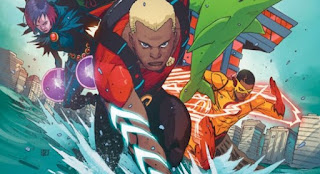 Aqualad has been part of the DC Universe for decades, usually as part of the Teen Titans, though more than one character has used the name. The newest Aqualad, Jackson Hyde, briefly appeared some years back as part of the “Brightest Day” crossover. He was then MIA until last summer, when he was reintroduced in a DC Rebirth one-shot.

But this seemed to be a new version of Hyde: For one thing, he’s gay—and sadly, living with a mom who berates him for his “unnatural” behavior.