"Do you put the balls in?"
From: NewNowNext 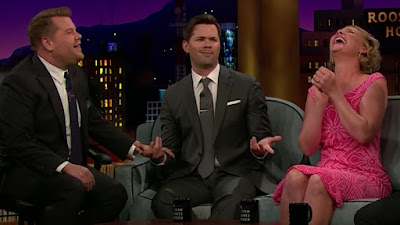 Andrew Rannells gave us all an education on stuffing one’s genitals into a sock during his recent visit to The Late Late Show with James Corden.

Seated next to Lars Ulrich and Katherine Heigl on the host’s couch, Rannells explained that he wasn’t wearing any pants in the clip from Girls they had just viewed because the script said his character was “doing the full Porky Pig.”

The actor went on to reveal he wasn’t wearing underwear for the shoot, but he did have on the infamous cock sock that stars often wear during sex scenes.

Corden then asked “if you put the balls in” the sock as well, which is something we probably all wouldn’t mind getting a little clarification on.

As they debate what the purpose of only covering the penis would even be, Heigl is brought to tears because she can’t stop visualizing it and, quite frankly, neither can we.

Check out the clip below.

Email ThisBlogThis!Share to TwitterShare to FacebookShare to Pinterest
Labels: actor