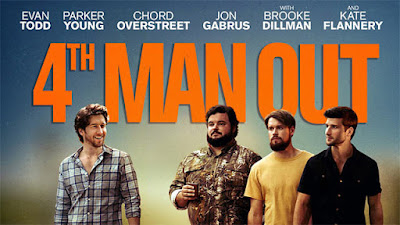 Was looking for something to watch on Netflix and came across this movie. I remembered hearing about it and have always like Chord Overstreet, so I decided to watch it and glad I did.  Made me and maybe even cry a little. Bonus, all four leading men are secy in their own ways. I guess I would call it a chick flick for gays, clearly about bromance and would recommend if you are looking for something for a Netflix and Chill night. 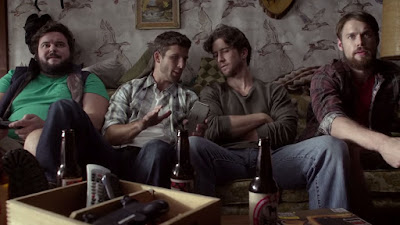 Fourth Man Out is a 2016 American comedy film written by Aaron Danick and directed by Andrew Nackman. The film stars Evan Todd as Adam, a young man living in New York state who, on his 24th birthday, comes out as gay to his best friends Chris (Parker Young), Nick (Chord Overstreet), and Ortu (Jon Gabrus).

Plot
On his 24th birthday, Adam (Evan Todd) struggles to come out as gay to his three best friends, Chris (Parker Young), Nick (Chord Overstreet), and Ortu (Jon Gabrus). Unable to reveal his secret, Adam goes with his friends to a failed night out at a bar, where Chris drunkenly flirts with a girl before the four friends make a quick exit to avoid a bar fight. The next morning, Adam manages to come out before quickly leaving to avoid any awkwardness. Comedy ensues as Adam's three best friends struggle to come to terms with their friend's sexuality, worried that his coming out might somehow change the nature of their relationships.