Conway: I have Secret Service protection because of the media 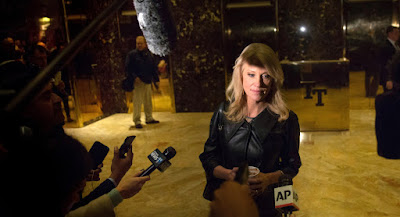 Counselor to the president Kellyanne Conway said Monday that she is under the protection of a Secret Service detail and that she has received packages at her home containing “white substances.”

Conway brought up the threats against her and her family during an interview on Fox News’s “Hannity” amid an exchange about what she and other Trump administration officials consider to be unfair treatment from the media. As Trump administration officials have done regularly in recent days, Conway criticized an inaccurate press pool report from Friday that stated that a bust of Martin Luther King Jr. had been removed from the Oval Office, when in fact it had not been.

The pool report was quickly corrected and the reporter apologized, but Conway and others have suggested that motives behind it might be more nefarious, part of a strategy to portray Trump as racist. On “Hannity,” Conway said she would not name the reporter behind the pool report in order to protect him from the type of harassment she said she has become subject to.

“I don't say his name publicly because I don't want him to get attacked like I do. Because of what the press is doing now to me, I have secret service protection,” she said. “We have packages delivered to my house with white substances. That is a shame and yes I hold him to account for it.”

A Secret Service spokeswoman confirmed Tuesday afternoon that Conway is under its protection.
Posted by Daniel at 1/24/2017 04:59:00 PM