Obama Can and Should Put Merrick Garland on the Supreme Court

The outgoing president has one final trump card—and he should play it.
From: New Republic 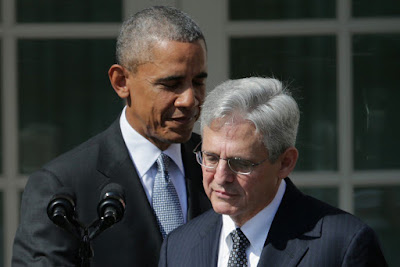 Come January 20th, President Barack Obama will be consigned to the sidelines as Donald Trump occupies the Oval Office and begins the work of dismantling his legacy. But there is one action that Obama could take on January 3, 2017 that could hold off some of the worst potential abuses of a Trump administration for up to a year. Obama can appoint his nominee Merrick Garland to the Supreme Court on that date, in between the two sessions of Congress.

Based on everything we know about Obama’s temperament and politics, he won’t resort to this. But given how Republicans relentlessly obstructed his efforts for eight years, he would be completely justified in playing one final trump card. And there’s a cost to ignoring that card. The fact that Democrats prefer to maintain governance norms, even while Republicans break them time and again, inescapably pushes the policy making apparatus of the country to the right.

Here’s how it would work. Article II, Section 2 of the Constitution states, “The President shall have Power to fill up all Vacancies that may happen during the Recess of the Senate.” This has been used for Supreme Court vacancies before—William Brennan began his Court tenure with a recess appointment in 1956. Any appointments made in this fashion expire at the end of the next Senate session. So a Garland appointment on January 3 would last until December 2017, the end of the first session of the 115th Congress.

Why January 3? Because the president’s recess appointment powers were significantly constrained by a 2014 Supreme Court ruling. In a 9-0 decision in National Labor Relations Board v. Noel Canning, the Court said the president cannot appoint individuals to fill vacancies if the Senate holds “pro forma” sessions every three days. Though these sessions, common since 2011, merely gavel in and gavel out the Senate chamber, they have the practical effect of keeping the Senate active, therefore blocking the recess appointment power.

But even the Court’s most conservative members acknowledged that a president can make recess appointments during “inter-session” recesses—such as the break between the first and second year of a Congress, or the break between outgoing or incoming Congresses. There simply has to be an end point there, as a metaphysical matter. Theodore Roosevelt once used a short inter-session recess to make hundreds of appointments.

Justice Stephen Breyer, writing for the majority, included language in the decision saying that Senate breaks of any kind, inter-session or intra-session, must be longer than ten days for appointments to be valid. However, legal scholars refer to this language as “dicta.” It was not relevant to the actual decision in Noel Canning, which was solely about whether pro forma sessions were legitimate. The clause about the length of a recess, more provocative lawyers argue, is authoritative but not binding. They say it goes beyond the facts before the Court, represents the individual views of the judge, and cannot be cited as legal precedent.

This is a highly aggressive and probably doomed strategy, without question. But we know that Congress understands the potential for inter-session recess appointments because Representative Chris Collins (a member of the Trump transition team) filed a constitutional amendment this year to end them. Collins specifically cited the Garland issue as his justification: “It’s been 111 days since President Obama nominated Merrick Garland for the bench and, while the Senate has continued to hold their ground on proceeding, we need to ensure the president cannot fill this slot—in the form of a recess appointment.”

It goes without saying that Obama appointing Garland in this fashion would be highly controversial. Indeed, it would make the nation’s collective head explode. Conservatives would demand the Court immediately block the appointment. However, it is likely they would need Garland to participate in a case that gets a ruling so they could have a plaintiff with standing to say they have been harmed by the Garland appointment. And then they would have to move that case through the lower courts. That process would take several months, and all the while the Supreme Court would have a center-left majority.

The intervening months would be filled with outrage and talk of treason. The media would be consumed with debating the question. Trump and his allies would denounce Obama’s lawlessness. Dahlia Lithwick is correct to call the prospect a “grotesque spectacle.” And potentially nothing else would get done, which, if you’re interested in not having the Republican majority govern effectively, is a little side benefit.

All that said, this would be completely out of character for Obama, who plans to spend his final two months in office as a horse whisperer to Trump, not an antagonist. The gambit would have an extremely low likelihood of permanent success—even if the Court didn’t rule the Garland appointment unconstitutional (and it probably would), he’d be out in a year.

More than that, it just wouldn’t be sporting. It would break a long-held governing norm, that you don’t use the powers of the office for short-term political gain. Obama would see reversing this as highly treacherous.

And that’s the real point. Republicans have absolutely no problem breaking any norm in their path to power. They turned the filibuster from a seldom-used tool to a routine exercise. Tom DeLay saw advantage in doing a second redistricting in Texas in 2003 to pick up extra GOP seats, even though states normally redistrict every 10 years; he succeeded. Congress typically passes the debt limit without comment, but Republicans took the country to the brink of its first default, extracting concessions in the process. A minority of the Senate prevented the confirmation for years of any director of the Consumer Financial Protection Bureau simply because they didn’t like the agency. The opposition party would never attempt to conduct foreign policy that differed from the president’s, until Republican senators tried it before the Iran deal.

And, of course, the year-long blockade of Garland, who has not even received a hearing in the Senate Judiciary Committee, violated a long-standing norm.

Republicans surely view Democrats in the same manner. They would cite the Senate’s use of the “nuclear option” to end the filibuster on executive branch and judicial appointees (though not Supreme Court justices), and the Obama administration’s reliance on executive orders on policies like immigration. But anyone weighing the two claims dispassionately would conclude that Republicans have shown far more willingness to bend the rules of governance to their will, and far less respect for how those rules have traditionally been administered.

There are consequences to one party being more aggressive about defying governing norms. If liberal legislation can’t break a Republican filibuster, but Democrats don’t offer the same resistance, the playing field is tilted to conservative policy. If Republicans use any maneuver to get appointees in place, and Democrats don’t, conservatives become more likely to be ensconced at executive agencies. If Republicans are willing to blackmail the government and Democrats aren’t, they get more concessions from that blackmail. If Republicans use gerrymandering and voter suppression and every available tool more sharply than Democrats, we get conservative government even if we vote for a liberal one.

Democrats, in short, bring a butter knife to a gunfight. They may be correct on the merits that institutional norms allow the government to function properly. But as long as Republicans don’t care about such niceties, that respect is equivalent to surrender.
Posted by Daniel at 12/31/2016 04:10:00 PM