MADONNA REFLECTS ON NEW YORK CITY DURING THE 70’S, “I LOST ALMOST EVERY FRIEND I HAD TO AIDS OR DRUGS OR GUNSHOTS” 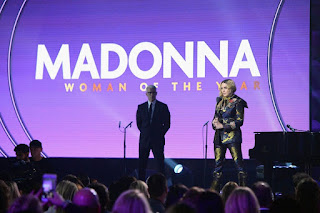 She was introduced by Anderson Cooper, who said that her music was incredibly helpful in him reconciling his sexualtity when he was younger.

“As a gay teenager growing up… Her music and outspokenness showed me as a teenager a way forward,” he said. “Through her music, she told me and millions of teenagers — gay and straight — that we are not alone. We are connected to each other.” 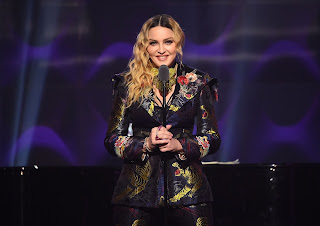 During her speech, the pop icon reflected upon her time in the city during the 70’s and her deep connection to the LGBTQ community.

“People were dying of AIDS everywhere. It wasn’t safe to be gay, it wasn’t cool to be associated with the gay community. It was 1979 and New York was a very scary place. In the first year I was held at gunpoint, raped on a rooftop with a knife digging into my throat and I had my apartment broken into and robbed so many times I stopped locking the door. In the years that followed, I lost almost every friend I had to AIDS or drugs or gunshots.”

The late David Bowie was incredibly instrumental in exposing the inherent sexism within the industry, something that Madge has remained outspoken about throughout her career.

“I was of course inspired by Debbie Harry and Chrissie Hynde and Aretha Franklin, but my real muse was David Bowie. He embodied male and female and that suited me just fine. He made me think there are no rules…. But that was wrong. There are no rules if you’re a boy. There are rules if you’re a girl…What I would like to say to all women here today is this: Women have been oppressed for so long they believe what men have to say about them. They believe they have to back a man to get the job done…. As women, we have to start appreciating our own and each other’s worth. Seek out strong women to befriend to align yourself with and to learn from, to collaborate with, to be inspired by and enlightened by. True solidarity amongst women is a power on its own.”