A contestant who was sent packing during The Voice’s blind auditions has released his first post-TV song, a cover of the Mary Wells’ 1964 hit “My Guy.”

The resulting “My Guy” turns out to be a love letter from Nicholas Ray to his boyfriend, Braxton, who joined him in support on The Voice earlier this month to tell judge Adam Levine how Nicholas wowed him with a performance of Maroon 5’s “Sugar” early in their relationship. 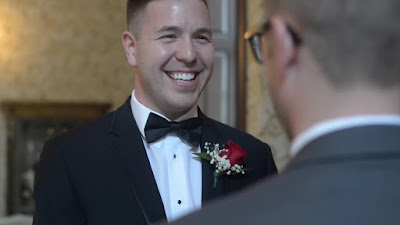 In a video for the new cover, Nicholas and Braxton exchange rings, get married, and share their first dance in a gorgeous room with a grand piano, where they sit down together as Nicholas tickles the keys.

Nicholas didn’t advance past the auditions round because the judge’s took issue with his falsetto, but who needs a celebrity’s approval when you have a good man waiting for you at home?!